I'm back and this year is going to be amazing for you and your families!

Remember me? I'm that guy who originally builded this blog back in 2013 ;)
After my last article in 2014 (almost 5 years ago...) it happened a lot in my personal life, so that I decided to quit the further development of my fitness blog in 2014 and to focus on all the other things that surrounded me.

Actually, I've started a new job in a big real estate company 4.5 years ago and I became a daddy of a lovely son that time. By now I'm a father of 2 beautyful boys and still work a lot in the company.

I'd used to tell myself that there's no time left (family and long work days combined is pretty hard if you're not used to it), I'd been fatigue due to the lack of sleep that came along with the baby boys and eating poor is mostly easy, time efficent and...I have to admit...sometimes pretty delicious (I guess that's the evolutionary demand for sugar, fat and salt).

To be honest, every now and then I'd started a new attempt to get fit again, but I'd never been consequent enough and always gave up after a few weeks...

Don't get me wrong, spending time with my kids is the best invested time ever. I love them more than anything else in the world and everytime I look at them my heart opens widely and I realize what matters most in life.

But here's the point...if you have kids, you really want to be there for them for a long, long time...that means you have to be healthy to live long and see them growing up. It also means that you have to be as fit as possible to play and romp with them, to climb up trees, play football, run around, swim and to do all the stuff that active kids love to do. At least if you don't want to be that parent that just stands at the side of the playground and watches YouTube instead of your kids playing or, even worse, sits at home and let your kids watch tv or tablet all day instead of doing what kids should do.

So, I want to be the agile, active dad that is able to play with his kids and see them growing up...therefore I now have to start my fitness and health journay again...credits from the past are almost exhausted.

Accidently I stumbled upon my old blog project (this one ;) ) with all the vital and helpful content that has been visited almost 470k times and has helped a lot of people who joined my during my journey back in the days. As I decided to start again I also decided to continue Andi's Fitness Blog as I hope that many of you can profit from my older articles about healthy eating, exersises, workout routines and knowledge as well as from the articles to come. I'll try to contribute to the blog at least once a week with some interesting stuff and some insights into my personal fitness development.

One month ago I've restarted and, like I said above, I'll tell you more about my new eating habits and how I integrate fitness and workouts in my tight schedule in further posts.

For now the most important message is that it's never too late and that you really should get your ass up if you already have kids or want to have kids in the future to be a better parent and role model for the small ones!

PS: If you don't want to have kids or can't have kids you are invited to join me as well of course ;) 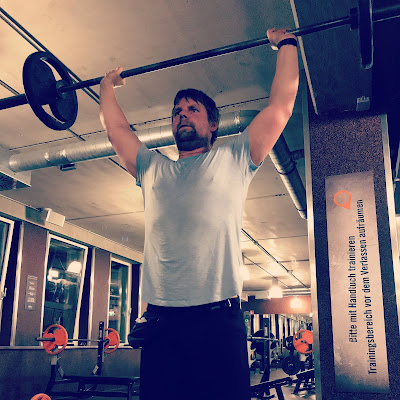