Summer's here and I bet some of you like having a picnic every now and then. If you are wondering what would be an awesome dish to take with you, try a tortilla de verduras! It's super healthy, low in carbs, high in proteins, fibres and antioxidants (due to the vegetables inside). Tortilla de verduras is really an awesome dish that could be eaten as a main dish, appetizer or you let it cool down and take it with you to a picnic. 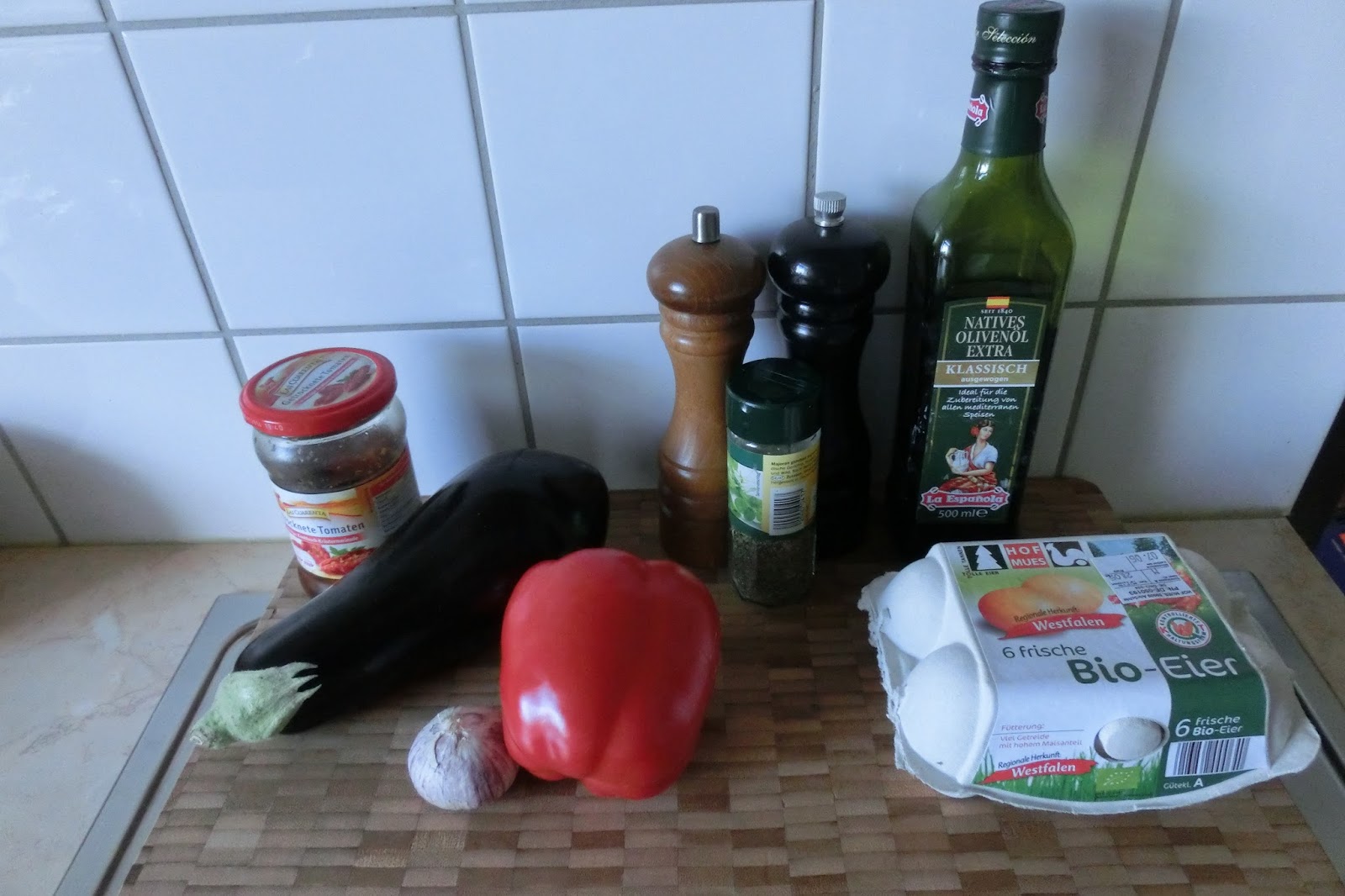 
Preparation:
Preheat an oven to 300° F (approx. 150° C). Cut the eggplant into slices and put them on a baking sheet that is lined with parchment paper. Now wash the bell pepper, cut it into stripes and place them onto the baking sheet as well. Afterwards cut the garlic in thin slices and spread them on the eggplant and pepper pieces (make sure that there is at least one slice of garic on each slice of eggplant). 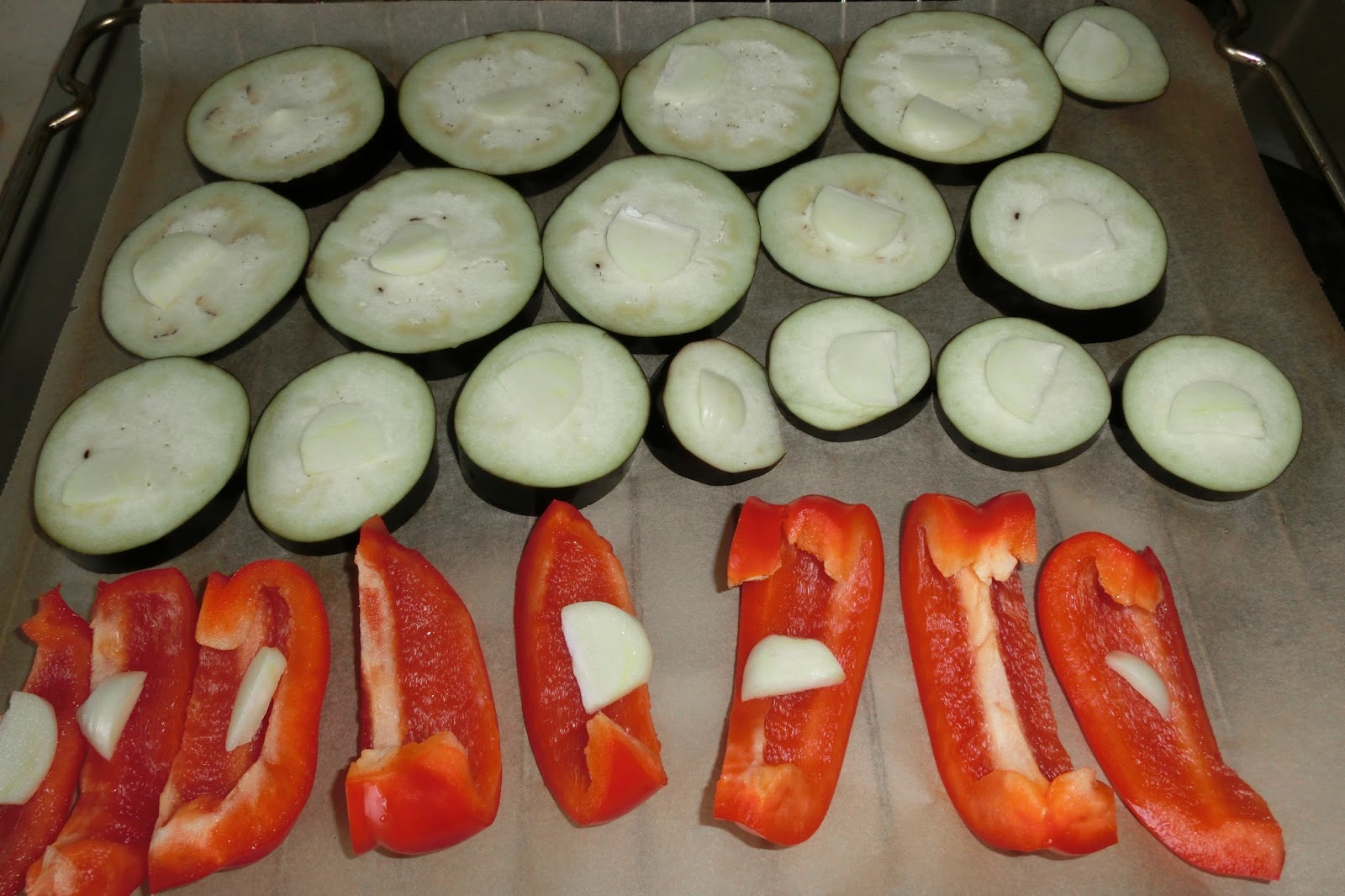 Slide the baking sheet into the oven and leave it there for approx. 15 minutes (until the eggplant is ligthly browned). Now cover the eggplant and the bell pepper with aluminum foil and cook it for 10 more minutes. Now take the baking sheet out of the oven. Cut the eggplant slices, pepper stripes and the dried tomatoes into small pieces, put them into a preheated sauté pan and stir-fry them with some olive oil. Crack the eggs  into a bowl. Add salt and pepper (and the herbs) to taste and beat them until they turn a pale yellow color. Pour the eggs slowly into the pan with the vegetables and let the egg mixture coagulate at low heat. 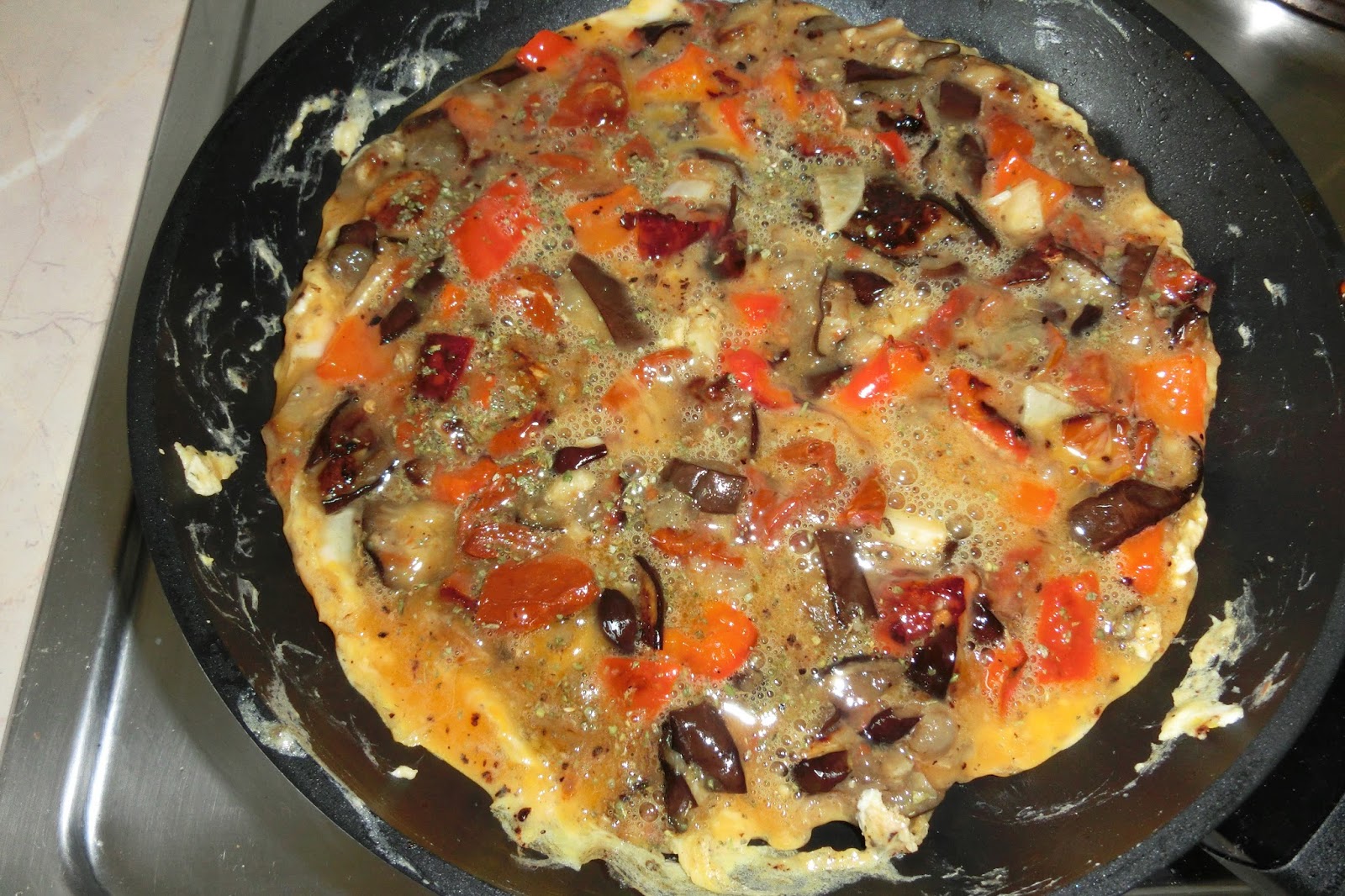 Use a spatula to loosen and lift the edges of the tortilla (the mixture), allowing the uncooked egg mixture to run underneath.When the egg mixture is fairly set and browned underneath, put a plate on the tortilla, turn it and let the other side coagulate as well. When the tortilla turned golden brown, pierce the top with a knife to make sure that it is cooked all the way through and slide it out of the pan on a plate. 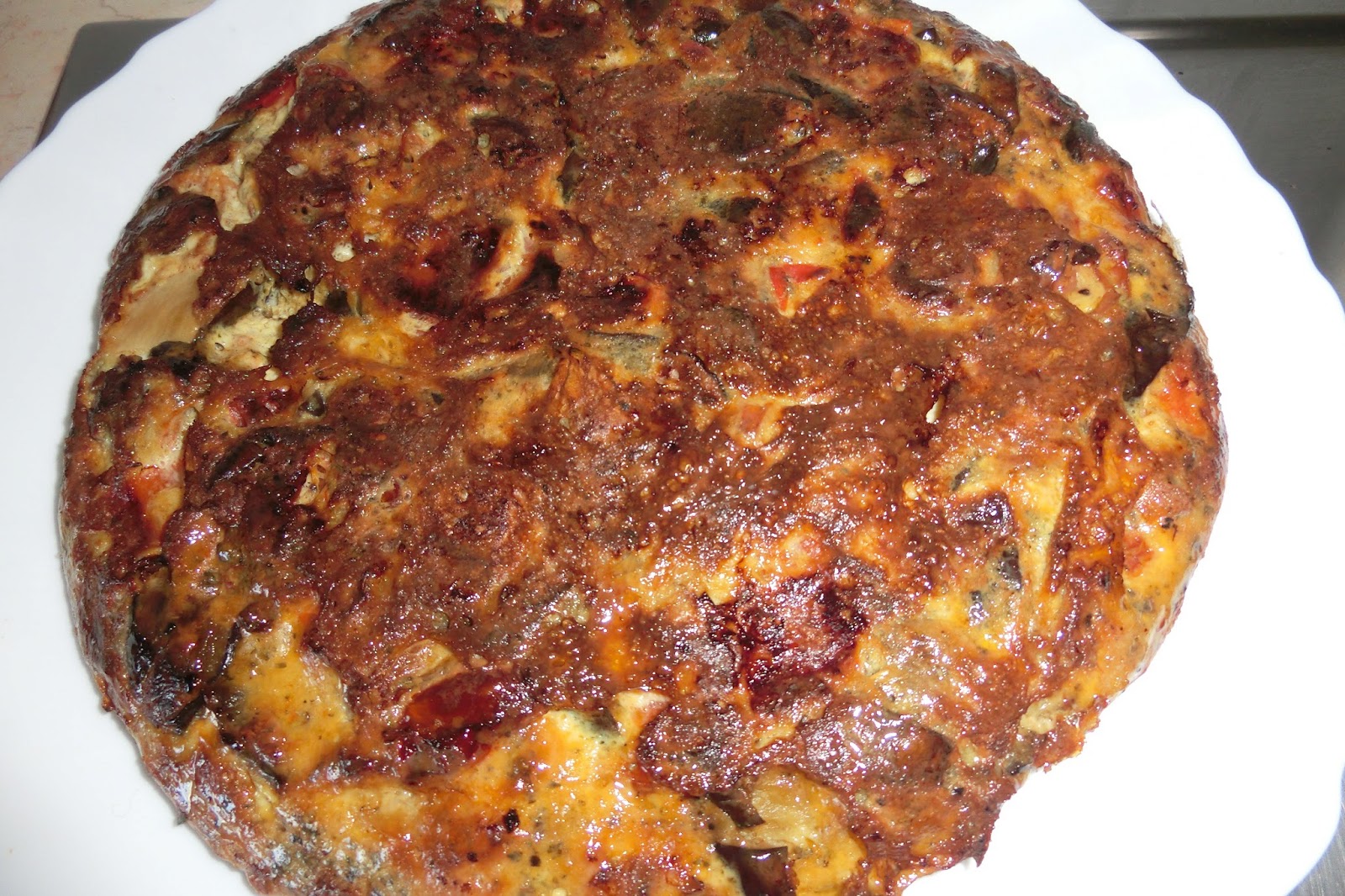 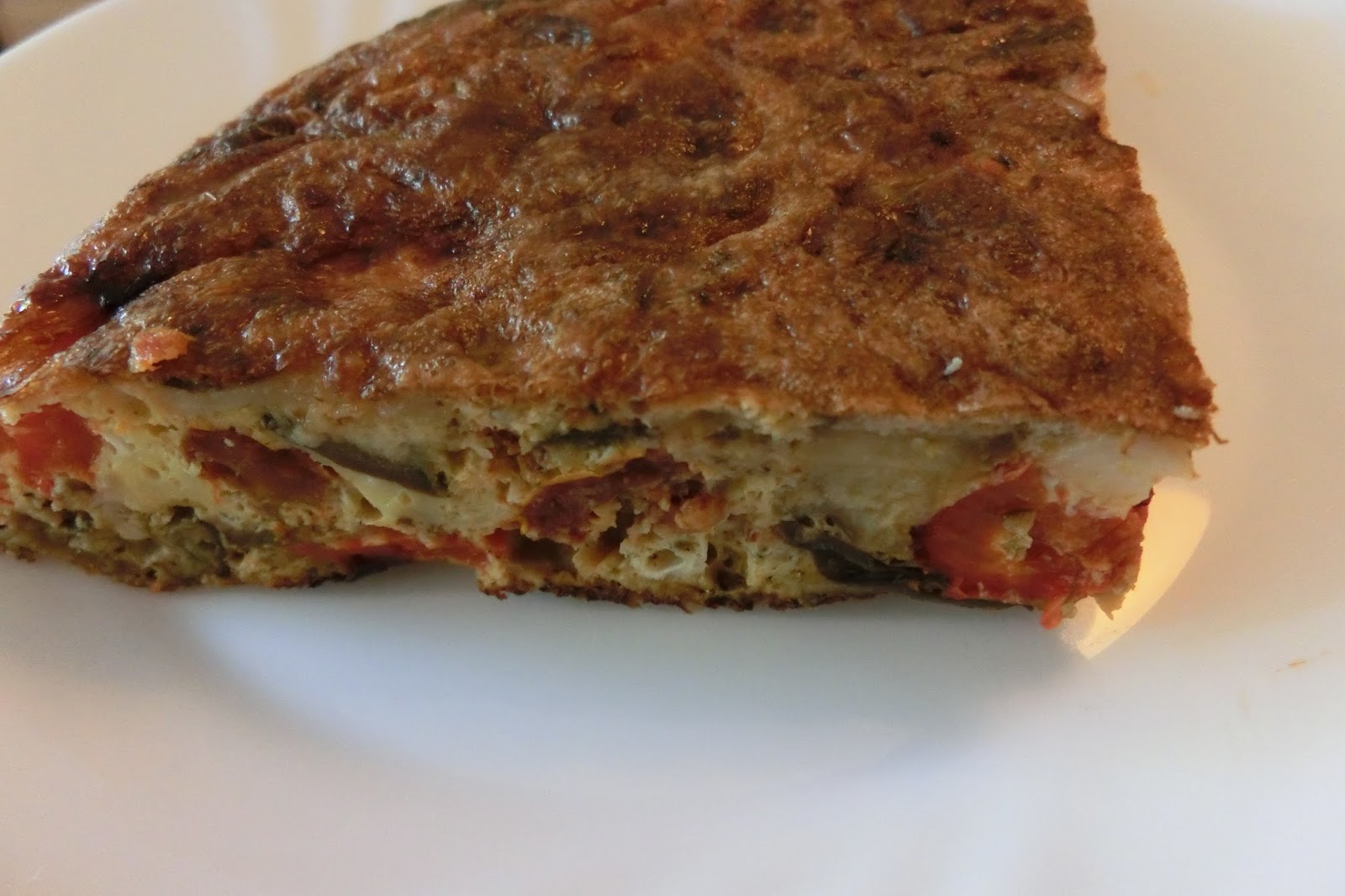 You can enjoy it warm or cold as a snack, appetizer or main dish.